Don't live in a house with mould

Moulds as living organisms have a specific purpose on our planet. For humans, they are used in the pharmaceutical, chemical and food industries. The best known is the use of the species Penicillium notatum, which produces known antibiotics. However, living with moulds does not only bring benefits. Their negative side is mainly reflected in their harmful effects on human health.

Moulds shoot out reproductive spores, which are released into the air from the mycelium. When we move or even live in areas with moulds we can suffer from headache, eye irritation, respiratory problems and allergies.

Moulds as they grow they produce dangerous ketones, aldehydes and ethers. These chemicals also can cause allergies or headache, fatique, eye irritations.

Moulds thanks to their enzyms are very adaptable to contaminate any substrate- also food.

They release mycotoxins into food which cause acute or chronic diseases-mycotoxicosis.

The elimination of moulds in residential buildings is therefore not just a cosmetic treatment, but a targeted intervention.

Moulds in living spaces are very dangerous. They release dangerous spores into the surrounding environment, and it is these spores that irritate us and provoke a cough, cause watery eyes, unexplained colds and can be the cause of many other allergic reactions in our body. In the event of their occurrence, immediate intervention is absolutely essential. It should be effective enough to prevent the recurrence and spread of mould.

Bathrooms and kitchens are among the most at risk of mould infestation in our homes. This is where the humidity often exceeds 60% and the temperatures are 20-25 °C. In the bathroom, mould usually starts to form first in the joints in the shower area or around the bathtub or windows. Of course, anywhere in home, where there are particularly cold corners, which can leak without us knowing, are high-risk areas. The area around windowsills is no exception. Moreover, if we dry laundry for the whole family, and if we often cook, water the flowers, it is not surprising that mould finds its places of occurrence.

BIOREPEL® is not a chemical product, but a biological product and is therefore a significant benefit in the field of mould control.

"BIOREPEL, which suppresses mould on walls, is ahead of its time because it does not pollute the air, not even the smell, and only notices mould. After the elimination of moulds, the clever fungus is placed in a resting stage and lurks for new moulds that would like to grow on the wall. 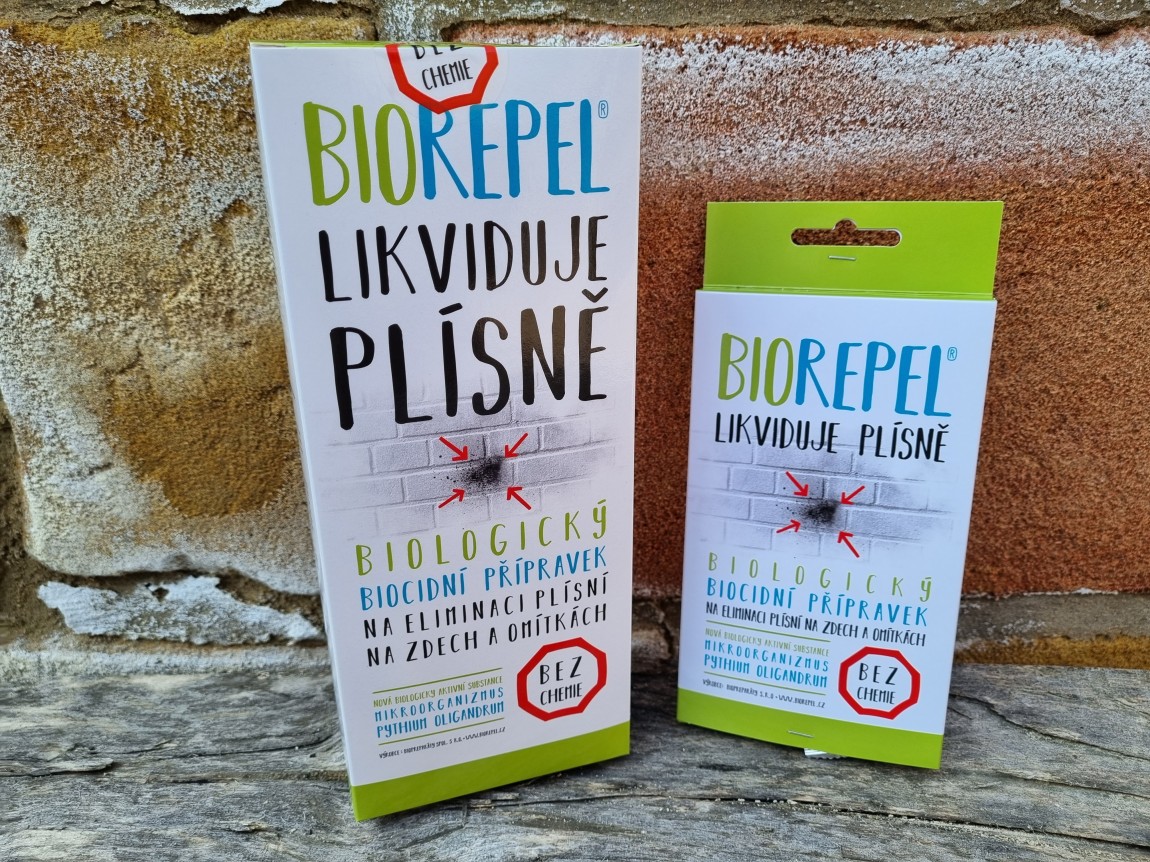 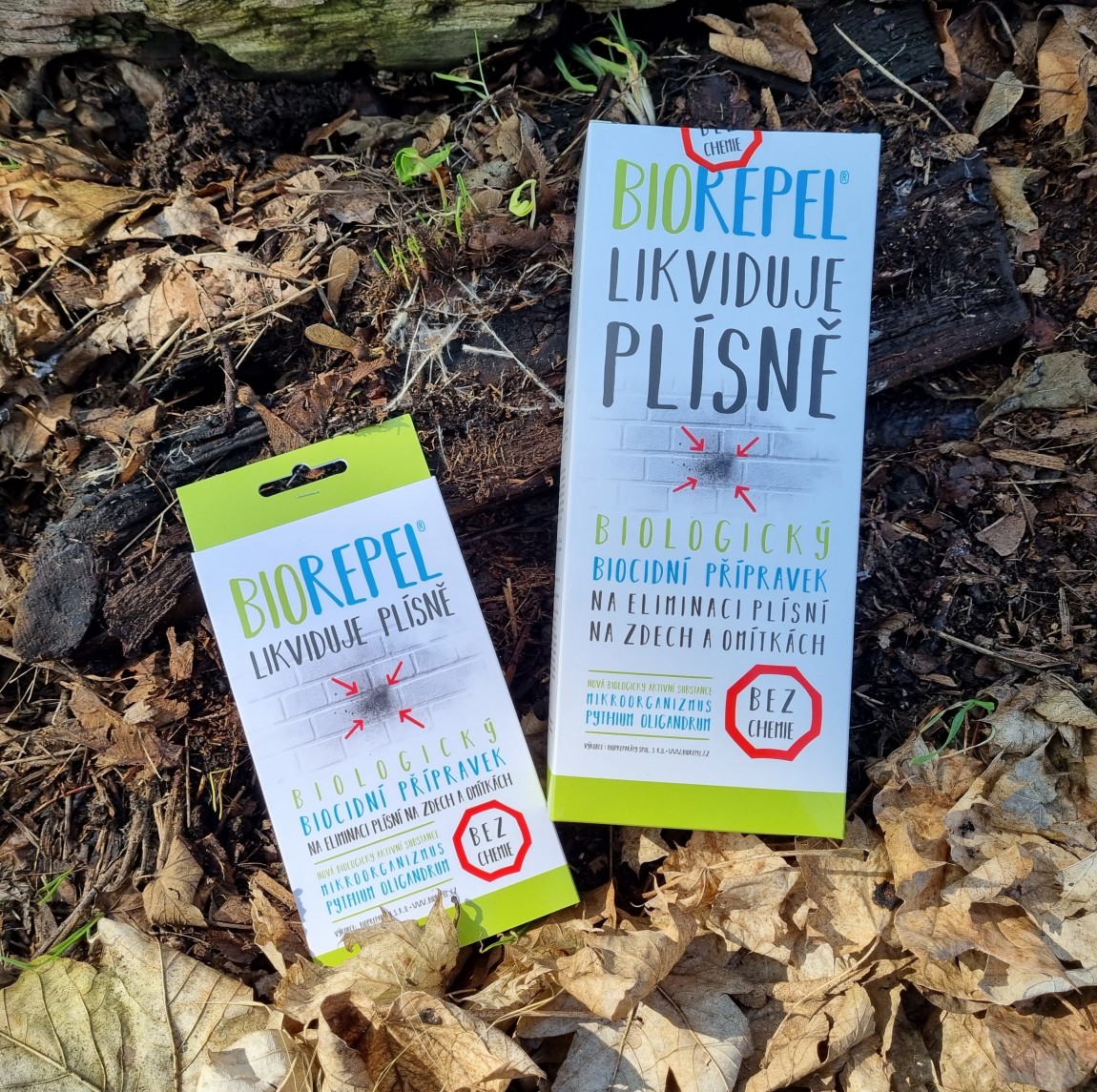 Microbiological contamination in enclosed spaces is a constant part of the air and contains bacteria, fungi, and viruses. BIOREPEL® is a biological product designed to combat unwanted mould on the walls of our homes. The unique biotechnology does not infest the surrounding area. BIOREPEL® kills mould by direct parasitism and reduces airborne contamination from unwanted microorganisms. Living spaces are immediately habitable during and after application.

Since it is a living fungus, after application in some cases there is sometimes a visible worsening of the wall mould, but after a few weeks the mould gradually subsides, and a significant improvement can be achieved after half a year or sometimes up to a year after application (until the complete disappearance of the fungus). The effect is then long-lasting. However, it is necessary to persevere and not to apply other chemical products (for example, bleach-based products successfully destroys the Clever Fungus, which then has no chance to fight the mould).

BIOREPEL® does not remove pigmentation from walls (various colour stains), because it does not contain chlorine and therefore has no bleaching effect. Without nutrients, the mould is dead, but the pigmentation remains. We therefore recommend repainting the walls with a paint without fungicidal effects.